For anyone who has ever been abroad or tried to go to a foreign country, they would know that going to another country could be very stressful, and all the paperwork necessary to do so could be extremely confusing too. I came to France in September 2015 in order to pursue my higher education. This wasn’t the first time I had ever lived abroad, having stayed 5 years in Scotland with my family as a child, while my father was doing his PhD. However, this time everything was different – I was no longer a small child who had to do nothing in order to go abroad, and I was going alone. Naturally, I was quite worried and panicky. However, before coming to France, I was contacted by Campus France, who asked if I needed help in securing admission in any French University, they asked me the details of my subjects, they asked me to send them the transcripts of my educational degrees. When I secured admission, they sent me all the documents that I would require once I set foot in France. Campus France was always one step ahead, thinking about how to help a foreign student. They also asked me to share my flight details with them so that they could arrange a transport from the airport, Charles de Gaulle to my residence in Paris. Transport and the transport system of a new country could be very complicated for anyone.

Campus France helped me with all the necessary procedures in order to be well settled in France. After regularly starting university, whenever I had any question, query or needed help, Campus France was always just an email away.

Campus France also organises dozens of cultural events each year. On the15th and 16th of November 2021, I was invited to two functions organised by Campus France. Having been founded in 2011, the events were to celebrate 10 years since its inception. I felt honoured that I received an invite. The venues were remarkable – on the 15th, the event was organised at the Carnavalet Museum. Access was also given to the invitees to review the permanent collection inside the museum. It was the first time I visited the Carnavalet Museum, and I was overjoyed to have a guided tour. The museum is dedicated to Parisian history, and I was taken aback by the remnants of the past that hung on the walls. I felt like I was inside a marvellous time capsule. It was wonderful to see how so many objects were preserved, like signs, coins, furniture from the 13rd century onwards.

The second event was organised at the Hotel of the Ministry of Foreign Affairs. Needless to say, I had never been there before either. I felt so honoured to be at such a prestigious place. The building was constructed in 1856, and the architecture was breath-taking.

Lastly, yet most importantly, I would like to thank Campus France for always being with me every step of the way, for inviting me to such events each year, and making me feel like a part of the Campus France family. Happy 10th birthday Campus France, may you have many more. 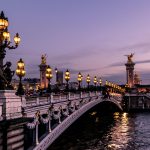 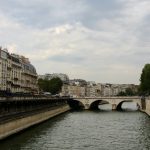